Sleeping with the Boss 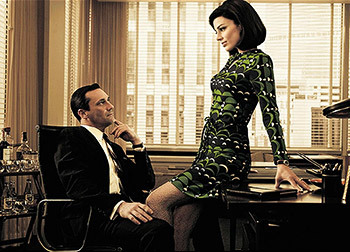 A sub-trope of Unequal Pairing and Office Romance, this is when a person in authority specifically gets "busy" with an employee or a member of their staff.

A favorite plot device in many a film, this usually takes on one of any given number of scenarios: the master of the house banging the maid, or the mistress of the house getting naughty with the pool-boy or gardener, or the office manager having "business meetings" with his secretary while his wife remains unaware. Either party in the affair may be the instigator, though usually that role goes to the one who holds the greater power and authority. Usually, too, the boss or supervisor is older and more "experienced" than the employee.

If either party is married or in a relationship (which is usually, but not always, the case in this kind of situation), this kind of affair comes of an unfaithful heart; unsurprisingly, in such a case, this usually results in a Love Triangle and all the problems that come with it. If the employee is female and the boss is male and married, the employee may take the role of The Mistress. Or, in some cases, the wife/husband of either participant may know of the affair, but won't say or do anything about it because they want to keep up public appearances.

Since Power Is Sexy, the employee is often perfectly happy with such an arrangement, and may even enjoy being ordered around and punished. However, this kind of situation also holds the risk of the employee eventually asking "Am I Just a Toy to You?", if the boss is flaunting their power over the employee just to satisfy a perpetually high libido. Or it may be a form of Sexual Extortion if the employee engages in sex with the boss under duress or blackmail (though the reverse can also be true, in that it's the employee who blackmails the boss).

Sometimes, the relationship is a part of the employee's strategy of Sleeping Their Way to the Top, advancing their career (or trying to) by seducing their superior. This doesn't mean their feelings are necessarily fake, though. The boss might be in the dark about it, or might know and just not care. Sometimes, it's the boss who decides to "reward" the employee, leading to Nepotism. Sleeping Their Way to the Top is thought to be especially common in showbusiness, leading to Casting Couch situations, when someone sleeps with the producer or director to land a starring role — though this, too, might sometimes cross into Sexual Extortion territory.

Whether the participants are single or are married to other people, this kind of scenario opens itself to some discrimination depending on the gender of the employee in the equation. If the employee is female and the boss is male, the woman may be seen as loose and only advancing her career by sleeping her way to the top, and she'll be branded by those who are aware of the relationship. If, however, the boss is female and the employee is male, then the man will be seen as extremely lucky, or, at worst, the situation may be given an indifferent shrug.

This can also happen in the military, which adds in the additional point that the relationship is probably flat-out illegal on top of all other considerations. See Inappropriately Close Comrades for more.

Compare Pizza Boy Special Delivery, where the persons in question aren't in a permanent boss/employee relationship but still have sex in the midst of conducting an otherwise ordinary business transaction; and Teacher/Student Romance, where the relationship in question takes place between a teacher and a student (though sex may or may not be involved in this case).

Also compare Bodyguard Crush, where a person's appointed security guard harbors feelings for their client or vice versa that may or may not be reciprocated; Subordinate Excuse, where the employee uses their being employed by the boss as an excuse to exercise affections for said boss (though that situation may NOT necessarily automatically result in the two parties having sex); and Hired for Their Looks, where the boss appreciates the employee's decorative qualities but doesn't go beyond ogling.

Note that this trope is not the same situation as the Sex Slave, where the person with the lesser authority is in captivity and is forced to engage in sex under orders from their captors.

Also note that the Office Romance speaks more generally about inter-office relationships and can be (and usually is) applied to co-workers who are on equal standing; this trope is specifically about a sexual relationship between a boss and their employee. It should also be noted that, although use or abuse of power on the boss's part does sometimes play a role in this trope, it does not happen in all cases, as some instances of this are mutually consensual.

Far more egregious and likely to result in retribution from the boss's end would be Sleeping with the Boss's Wife.

No, this isn't about video game Boss Battles.