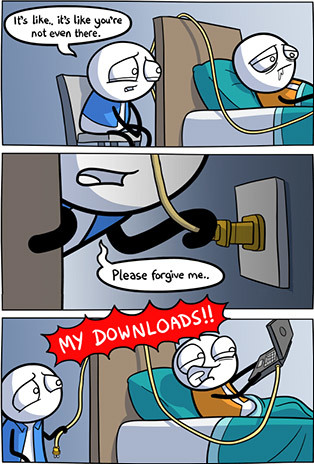 In a way, that's even crueler than what they misled us to believe.
"There was a very famous Jewish girl who kept a diary. It... ended badly. But enough about Fran Drescher! You thought I was making a Holocaust joke! Shame on you!"
— Klaus, American Dad!
Advertisement:

A type of setup where a character leads the audience or other characters into thinking they are going to say or do something, but says or does something unexpected. This is usually a joke, and if the punch line of the joke causes the first part to take on a new meaning (e.g., "I just flew in from Chicago, and boy are my arms tired"), it is technically called a "paraprosdokian." Note that this trope doesn't have to be Played for Laughs however; serious examples count here as well.

In Dialogue, Arson, Murder, and Jaywalking is one example. The first two words raise the expectation of another crime, equally severe, but then switch it out with jaywalking.

in which a store would bait a customer into their store with an advertisement featuring a product selling for a reduced price, but when the customer got there, they would find out that they were "all out" of the advertised product... but the store would be happy to sell a similar product for just a few dollars more, thus performing the switch.

Can be a form of Subverted Trope, or a Double Subverted Trope if the thing being switched is a trope in itself. Sometimes turns into a Brick Joke if there's a later payoff. Related to Anti-Humor.

This can also happen in film trailers and commercials as well.

These sources have so many of these gags that they have their own sub-pages:

open/close all folders
Advertising
Animation
Anime & Manga
Comedy
Comic Books
Comic Strips
Films — Animation
Films — Live-Action
Jokes
Literature
Music
Pinballs
Podcasts
Poetry
Pro Wrestling
Radio
Sports
Tabletop Games
Theatre
Video Games
Visual Novels
Web Animation
Web Comics
Web Original
Web Videos
Misc
Henry Trewhitt: I want to raise an issue that I think has been out there for two or three weeks, and cast it specifically in national security terms. You already are the oldest president in history, and some of your staff said you were tired after your recent encounter with Mr Mondale. I recall that President Kennedy had to go without sleep for days on end during the Cuban missile crisis. Is there any doubt in your mind that you would be able to function in such circumstances?
Ronald Reagan: Not at all, and I would like you to know, Mr Trewhitt, that I am not going to make age an issue in this campaign. I am not going to exploit, for political purposes, my opponent's youth and inexperience.
Feedback

When Bart moans that everybody's got a snow day except his school, Marge rebuffs this, saying adults don't get the day off...only for Homer to come in saying he doesn't have to go to work because of the snow.

Are You Happy Now?

When Bart moans that everybody's got a snow day except his school, Marge rebuffs this, saying adults don't get the day off...only for Homer to come in saying he doesn't have to go to work because of the snow.

Are You Happy Now?