Film / The Masque of the Red Death 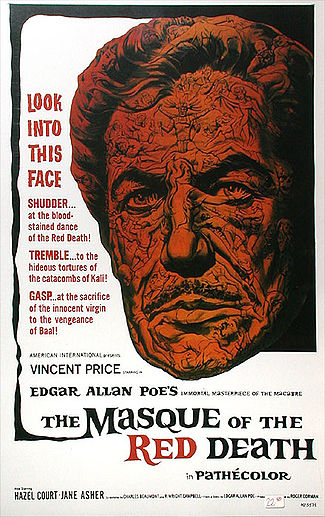 "The way is not easy, I know, but I will take you by the hand and lead you through the cruel light into the velvet darkness." note Neither the catacombs of Kali nor the vengeance of Baal are actually mentioned in the film.
Advertisement:

Prince Prospero (Price) is a tight-fisted ruler that rules over his land cruelly, justifying his behavior through his devout faith to Satan. When he discovers that the Red Death — a plague that causes its victims to bleed from every pore of their skin — has arrived in a nearby village, he takes captive three healthy individuals — Francesca (Jane Asher), her father Ludovico (Nigel Green), and her lover Gino (David Weston) — and orders the rest of the village to be burnt to the ground. He offers solace to other lords in the area to join a gala devoted to vice of all sorts in an attempt to stave off the Red Death, unaware that it has plans of its own...

The film greatly expands upon the original tale and combines it with another Poe work, "Hop-Frog", as well as aspects of the French tale Torture by Hope by Auguste Villiers de l'Isle-Adam. It has been praised as one of Corman's best works (and, in fact, remains one of his favorite films to work on); while notorious for cutting corners, Corman maintained a high production value by filming in Britain (which gave him a British government subsidy) and using sets left over from the production of Becket.

The Many Colored Deaths

Not only is the Red Death dressed in all-red, but the other incarnations of death wear similar robes but in different colors; White, Yellow, Gold, Blue, Violet and Black.

Example of:
Colour-Coded for Your Convenience

The Many Colored Deaths

Not only is the Red Death dressed in all-red, but the other incarnations of death wear similar robes but in different colors; White, Yellow, Gold, Blue, Violet and Black.