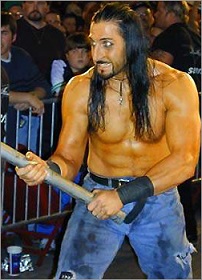 Christopher "Chris" Ford (born March 4, 1974) is an American professional wrestler from Rutherford, New Jersey best known for his work in the 1990s and early 2000s as Devon Storm or Crowbar. He debuted in 1992 after training at Iron Mike Sharpe's school under the Devon Storm name competing in various independents. He also had some matches in ECW and took part in the tournament to fill the vacated WWF World Light Heavyweight Title

and he and his tag partner Ace Darling did some jobs on WCW TV as well. In November 1999, he was reintroduced to WCW audiences as Crowbar, an ally of David Flair and Daffney Unger. David and Crowbar would hold the WCW World Tag Team Titles

before the trio split up, with David going off on his own and Crowbar and Daffney staying together. Crowbar would also hold the WCW World Cruiserweight Title

and the WCW Hardcore Title

. After WCW closed, WWE did not pick up his or Daffney's contracts. He went back to the Storm name and returned to the independents. He did some jobs on WWE's weekend B Shows Sunday Night Heat and Velocity in 2003. He entered TNA as Tempest of "Father" James Mitchell's the New Church. He has also worked as a physical therapist and continued working the independent circuit, showing up in promotions such as Ring of Honor. Prior to his WCW run, he was well known for his work in the Mid-Atlantic independent scene of the late 1990s alongside Ace Darling, Reckless Youth and Lance (Simon) Diamond.

He is in no way connected to James Storm, Lance Storm or Brother Devon or to the band Crowbar.