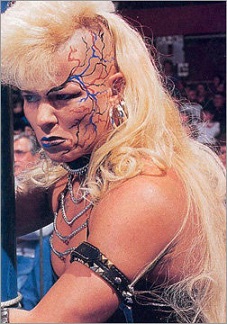 In a world full of butterflies, it took balls to be a caterpillar. I love that quote from Luna, and in a way I can't help but hope that this life was but a chrysalis of sorts for her; that for a woman who never seemed completely comfortable in her own skin, this life was just a prelude to becoming the beautiful butterfly god always meant for her to be.
But that would be too easy and so anti-Luna. There are enough beautiful butterflies out there already. Maybe we should be able to appreciate the beauty of the caterpillar without needing or wanting it to change for our viewing pleasure. Maybe Luna was perfect just as she was. Maybe she was exactly who she was supposed to be.
— Mick Foley, on the life and death of Luna Vachon.
Advertisement:

Gertrude Elizabeth Vachon (January 12, 1962 – August 27, 2010), better known by her ring name '''Luna Vachon, was a Canadian-American professional wrestler and manager originally from Atlanta, Georgia. Among her in-ring achievements, she was a 1x USWA Women's Champion

She began training at the age of 16 with her aunt Vivian and The Fabulous Moolah before beginning her career in earnest by 1985. Her first on-screen role was as a TV reporter named Trudy Herd, who was in Florida to interview FCW wrestler Kevin Sullivan. Sullivan instead brainwashed her into becoming "Luna", a cultist in his "Army of Darkness", resulting in her bizarre makeover and trademark statico voice. Luna was teamed with the Lock (formerly Winona Littleheart), forming the Daughters of Darkness. When that team broke up, she knocked around the independent circuit as a manager, forming the aptly-named Black Harts, Apocalypse (alongside David Heath) and Destruction (w/ Tom Nash.) She made her PPV debut in the Street Fight Lingerie Battle Royal at the AWA's SuperClash III.

She made a surprise WWE debut at WrestleMania IX, first spotted in Shawn Michaels' corner during his match with Tatanka. She would go on to feud with "Scary" Sherri Martel and Alundra Blayze (Madusa) before leaving. In 1995, she made (another) surprise debut at the end of ECW Enter Sandman, siding with Tommy Dreamer in his feud with Raven. They would team up against Raven and Stevie Richards to unsuccessfully challenge for the ECW World Tag Team Titles

at ECW Hardcore Heaven on July 1st, though Luna would defeat Richards in a cage match two weeks later at Heat Wave. In 1997, she resurfaced in WWE as the manager of ("TAFKA") Goldust on Raw, which led indirectly to her famous feud with Rena Mero (Sable) and The Headbangers.

Luna disappeared from television for a short while but, in 1998, she redebuted on Raw as "Princess Luna" of The Oddities. While the Oddities' face turn rewarded her with more political clout, she proved too nutty to remain neutral for long and made another play for Sable's title. Unfortunately life began to imitate art, and Luna was released for good in 2000 following a series of brawls with Mero backstage.

Sadly, she was found dead of a drug overdose after years of suffering with Bipolar Disorder on August 27, 2010. She was posthumously inducted in the WWE Hall of Fame in 2019 as part of the Legacy Wing.