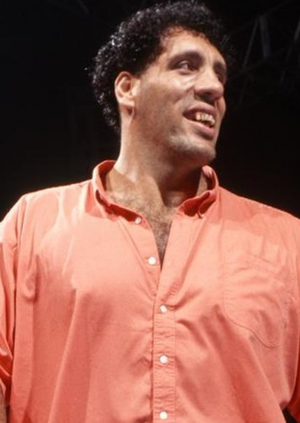 "I have found a wrestler able to bring HUSTLE down. Tell your boys to get ready. Any number of them."
— Nobuhiko Takada introducing Silva in HUSTLE
Advertisement:

Paulo César da Silva (born July 21, 1963 in São Paulo, Brazil) is a Brazilian Professional Wrestler and Mixed Martial Arts fighter, better known as Giant Silva. He debuted in 1981 and signed with World Wrestling Entertainment, where he was put in The Oddities stable along Kurrgan, Golga and other characters. After the group's demise, Silva was fired to make room for The Big Show. He moved to Mexico for the Consejo Mundial de Lucha Libre, where he became incredibly popular as a surprisingly athletic babyface giant. He then was recruited by Antonio Inoki and left for New Japan Pro-Wrestling, joining Giant Singh (afterwards known as The Great Khali) to form the team Club 7, Masahiro Chono's giant bodyguards. The two titans eventually turned on each other and both left NJPW, with Silva landing in Dream Stage Entertainment. He gained popularity after starting a rather unfortunate MMA career and simultaneously competed in Fighting Opera HUSTLE, where he served as Generalissimo Takada's main enforcer. After the fall of HUSTLE, Silva kept wrestling in the American wrestling circuit before fading into the darkness. He is apparently retired, and according to rumors, works as a bouncer.

Is not at all related to SiIvaGunner.