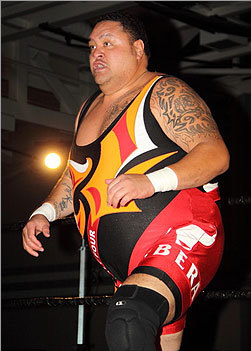 Time to fight.
"Japan loves to put sumo wrestlers in non-sumo situations, and it has never gone well. Sumo skills translate to fighting about as well as they do to trampoline safety. Coming into his fifth fight, Akebono had never won a kickboxing match or even demonstrated that he'd seen a kickboxing match, so it should be safe to put him against the kickboxing champion of the world, right?"
—Seanbaby on a certain article mentioning Akebono.

Advertisement:
Akebono was still a huge celebrity to the average wrestling fan, but hardcore fans saw a large man they were trying to make the next Tenryu, except Tenryu lost a lot of his sumo weight and could actually wrestle worth a damn."
—J.K. McMillan on AJPW history.

Akebono Taro (born 8 May 1969 as Chadwick Rowan) is an American-born Japanese sumo wrestler, professional wrestler, Mixed Martial Arts fighter and kickboxer. Born in Hawaii, Rowan joined the sport of sumo after college and was put under renowned master and fellow Hawaii native Takamiyama from Azumazeki stable, adopting the name of Akebono ("daybreak"). He rose rapidly through the ranks, breaking records in wins, and ended reaching up the title of grand champion or yokozuna in 1993, being the 64th in the line. Akebono aspired to a tranquil retirement after it, but personal troubles and economic mismanagement caused him to go bankruptcy. It forced him to work a career in K-1 kickboxing and some MMA ventures, which only brought him a losing record and several heavily televised beatdowns. However, he would have infinitely more success in pro wrestling, first appearing for WWE as part of a special sumo match against The Big Show in Wrestlemania 21. He then joined All Japan Pro Wrestling under Keiji Mutoh, becoming a huge draw and one of its superheavyeight mainstays. Finally away from competitive sports, Akebono wrestled for all the major promotions in Japan, among them New Japan Pro-Wrestling, Pro Wrestling ZERO1, Fighting Opera HUSTLE and Dragon Gate, winning a string of championships. In 2015, after a long tenure in AJPW which got him touted as the next Giant Baba, he went to form his own promotion, Odo.

In 2017, Akebono suffered heart failure and was in a coma for several days. He lost the use of his legs and part of his memory, most likely ending his professional wrestling career.