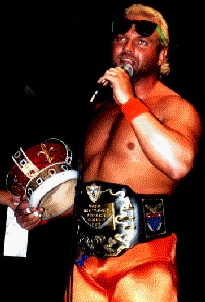 Thomas Edward Gilbert Jr. (August 14, 1961 – February 18, 1995) was an American professional wrestler, manager and booker from Lexington, TN as "Hot Stuff" Eddie Gilbert. He was best known for his work in the Memphis area, usually feuding with Jerry Lawler. He also was the original booker for NWA Eastern Championship Wrestling. After a run in Jim Cornette's Smoky Mountain Wrestling in 1994, he left to book in Puerto Rico, where he died on February 18, 1995. He also competed for WWE in the early 1980s as a Jobber, for WCW, for the World Wrestling Council in Puerto Rico, for the Global Wrestling Federation in Dallas, TX, for the hardcore W*ING and IWA promotions in Japan, for various National Wrestling Alliance territories, for New Japan Pro-Wrestling and for "Cowboy" Bill Watts' Mid-South Wrestling/UWF promotions. Among his achievements, he is a former NWA ECW Tag Team Champion

with his brother Doug (under a mask as the Dark Patriot), a former 4x USWA Unified World Heavyweight Champion

with Sting. He also had a famous three-match series with Cactus Jack in 1991 for the Tri-States Wrestling Alliance