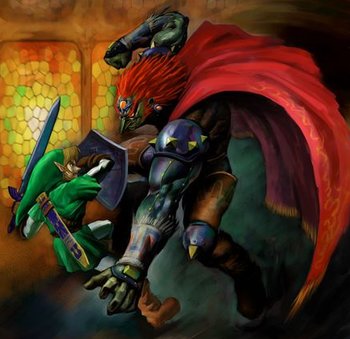 And this is before he takes the form of a giant, demonic Pig Man.
"I wish you could see my prototype. It's not as... ah, well not as conservative as yours."
— Obadiah Stane, Iron Man
Advertisement:

The David Versus Goliath plot is where the hero is the underdog in comparison to the villain. One of the easiest ways to have this come across visually to audiences is to literally make the villain physically larger.

Aside from the villainous characters themselves being big, their tools and resources also tend to be bigger. If the hero has Powered Armor, the villain has a Humongous Mecha. If the good guys come from The Good Kingdom, the bad guys come from The Empire. If the hero has an average-sized Cool Sword, the villain has a BFS. At the climax of a Speculative Fiction work, the villain may go One-Winged Angel to increase his size and strength. In High School settings the local Alpha Bitch or Jerk Jock is often taller than the Cool Loser protagonist (and the Alpha Bitch tends to wear heels for good measurenote Interestingly, though, she's still rarely taller than her average male classmate. That's usually the province of the Huge Schoolgirl, whose height leads her peers to consider her less feminine and attractive.). The list goes on and on.

Furthermore, this trope is hard to invert. The language of visual media has practically inherent connotations of size being directly proportional to strength and power so thoroughly that it is genuinely difficult to make a smaller villain without the audience developing concerns and undeserved sympathy for the antagonist having to face off against a big, strong hero; it requires lots of time and effort to work through this tendency prior to any such confrontation between hero and villain. Exceptions to this trope, when they do exist, usually make the smaller villain a Pintsized Powerhouse and/or much more intelligent and cunning than the hero. These villains include among their ranks the Depraved Dwarf, Mister Big, and evil examples of The Napoleon and Killer Rabbit.

There are other practical reasons for this in Video Games, particularly in the Action or First Person Shooter genres. One reason most bosses tend to be larger than the hero is to make it easier for the player to tell when they've landed a hit. One reason Ledge Bats are so annoying is their tiny size makes it nearly impossible to judge an attack properly. Several examples of That One Boss can be a result of a tiny Boss in Mook Clothing that's hard to hit. Likewise, there's a point where a playable character's model can obscure the screen and induce Fake Difficulty.

This is the reason why Large and in Charge is more common among villains.