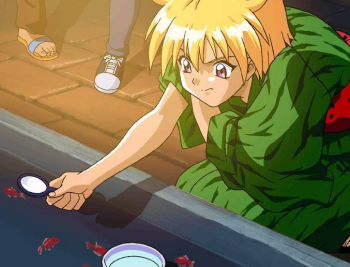 A carnival-style booth game usually found at festivals in Japan, called kingyo-sukui in Japanese. It consists of a large tank of goldfish and a number of scooping "nets" made of thin paper or fragile gauze. The player tries to catch a goldfish before the "net" breaks or falls apart from the soaking it receives. If they succeed, they get to keep the goldfish. If not, that'll be another 500 yen (about $4.39 USD) to try again. This and other maddeningly-difficult (if not outright rigged) carnival games are referred to as kodomo-damashi, or "cheating the kids", for obvious reasons. To avoid tears and accusations, operators will often give single goldfish as a consolation prize after multiple unsuccessful attempts.

There's also a similar game involving "fishing" for yo-yos floating in a tank of water, using a paper string; the yo-yo must be removed from the tank before the string breaks. Another variant has the player fishing for baby turtles instead of goldfish. The American equivalent is where you use a ping pong ball and try to get into the fish's bowl to get the fish.

Not related to the Goldfish Poop Gang.