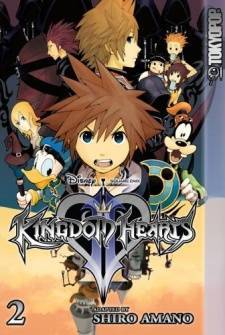 Like the other adaptations by Amano, the core plot is the same as the game with minor differences sprinkled throughout. There is also a greater focus on comedy, but this does not stop the story from frequently having serious moments when it is appropriate.

A hiatus took place after the release of Volume 5 as Shiro Amano did the manga adaptation for Kingdom Hearts: 358/2 Days. The hiatus has ended, and Volumes 6, 7, and 8 have since been released, while Volume 9 was released in 2015. Tokyopop translated the first two volumes into English before losing the rights to the manga; Yen Press has since retranslated all five volumes and released them in two volumes, with Volume 3 (Volumes 6 and 7 in Japan) released in late 2014. Volume 4 of the English language translation, the final volume, after a very long wait, was finally released

on May 30, 2017 and included a preview of the English release of the first installment of the Kingdom Hearts II novelization.

This manga contains example of: