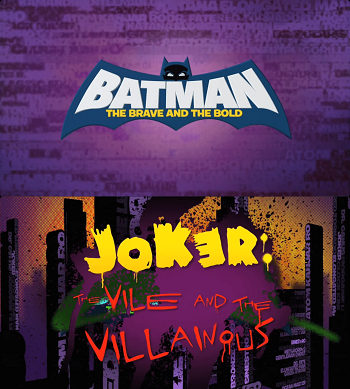 "We're the Hive Five, and this is our show now!"
— Jinx, after interrupting the Teen Titans (2003) opening
Advertisement:

A Villain Episode is a type of Lower-Deck Episode or A Day in the Limelight which focuses on the antagonist. In all cases, the villains get the majority of the screen time. The heroes might not appear at all, or they might appear but get much less screen time than usual. Either way, a villain episode presents an alternative view of the show by showing details of the villains' daily life, their hopes and dreams, and how they interact with their minions during downtime.

In an episodic show, a villain episode is usually used just for the sake of something different. For example, if a show normally revolves around a group of heroes fighting a Monster of the Week, being defeated, learning a valuable lesson, and defeating the monster, a Villain Episode shows the villain coming up with an evil scheme, creating a monster specifically to take advantage of a problem being faced by one of the heroes, and releasing it, only for it to be defeated again.

In an arc-based show, a villain episode is a good opportunity for Character Development. It allows the writers to reveal details about what drives the villain and how they feel about the constant defeats at the hands of the heroes. Often, the villains become more sympathetic after getting such exposure. In quite a few cases, these are considered some of the best episodes by fans.

Sometimes the entire episode will be mostly Villains Out Shopping. Sometimes literally.

Note that in a series with a Villain Protagonist, a Villain Episode would technically be one which focuses primarily on the Hero Antagonist.