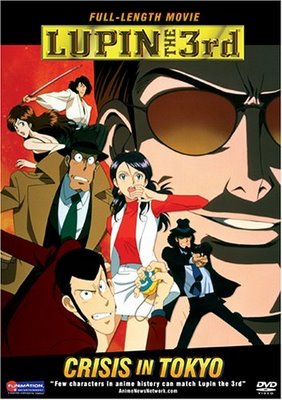 Lupin III: Crisis In Tokyo, released in Japan as Memories of the Flame ~Tokyo Crisis~ note 炎の記憶 ~Tokyo Crisis~, is the tenth of the Lupin III Yearly Specials, and released in 1998. It was directed by Toshiya Shinohara, who also co-directed the previous year's Island of Assassins, making him the first returning director to the specials since Osamu Dezaki. It was released in America by Funimation in 2005 as an individual film, and again in 2006 as part of the "Final Haul" box set. Discotek Media later made a Blu-ray release under its original Tokyo Crisis name.

Days before the opening of the massive new Tokyo theme park, Aquapolis, Zenigata is charged with the safety of two rare photographic plates of the last Tokugawa shogun to be displayed as part of the park's opening exhibit. The plates are rumored to contain the secret to the location of the missing Tokugawa treasure, so naturally Lupin III has taken a vast interest in them. Things are not going to be easy this time, however; the residence of millionaire park and plate owner Michael Suzuki is a tower of frighteningly advanced technology. Complicating things, Jigen is suffering from a toothache that throws off his legendary aim, and Goemon has had his beloved sword stolen by collector Suzuki.

Even worse, Zenigata is taken off the case after blowing a key operation. Desperate to prove he can capture Lupin, he ends up enlisting the help of Maria, a reporter who has been following him as part of a story on ICPO operations. As the caper proceeds, the stakes grow high, and Suzuki proves to have far more up his sleeve than just his millions of dollars. Will Lupin escape with his life, let alone the legendary treasure?