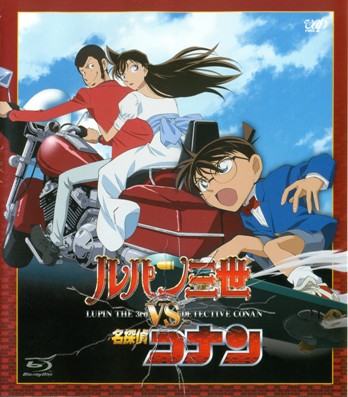 Lupin III Vs Detective Conan is a Made-for-TV Movie Crossover of the Lupin III and Case Closed series. It debuted on March 27, 2009 and was directed by Hajime Kamegaki, who had previously directed Lupin III: Seven Days Rhapsody. It was licensed by Discotek Media for English release in 2015.

Queen Sakura, sovereign of the European kingdom of Vespania, is killed while the royal court (her brother Prince Gerard and son prince Gill) are out hunting. All indications suggest that she was accidentally shot by Gill, who immediately commits suicide, overcome by guilt. This news is reported around the world, with a reminder to the audience that Vespania was already recently in the news, because of the strange new minerals found only there.

With the death of the queen and prince, the young but bratty Princess Mira is next in line. However, Vespania citizens are rallying to say the princess is too young and unfit to govern. To increase the princess' popularity, a trip to Japan is organized by the Vespanian Chancellor, Count Keith. A festival is held at the Grand Hotel West City Tama. Despite her protests, Mira attends the opening, though Keith does all the talking for her. Kogoro Mouri, Sonoko Suzuki, and Conan Edogawa attend; Ran Mouri is supposed to go too, but she running late. At the party, Conan exposes an attempt to assassinate the princess. Mira herself wants nothing more than to escape from her condition, so in the confusion that follows, she sneaks away; Conan notices this, and follows her. Mira runs into Ran, who looks identical to her. They trade places, Ran returning to the hotel while Mira gets picked up by Fujiko. Conan notices the two splitting up, and Conan pursues Fujiko on skateboard...

Lupin's team is already involved in some plan by the time Conan arrives in Vespania. Can the two team up to keep the princess on the throne, or will she fall victim to assassination or suicide? Was the late Queen's death an accident, or has Conan stumbled upon another murder? No matter what crime, no matter who is involved, no matter how complicated the deduction, with a keen eye for details, only one truth prevails!

The sequel is Lupin III vs. Detective Conan: The Movie.