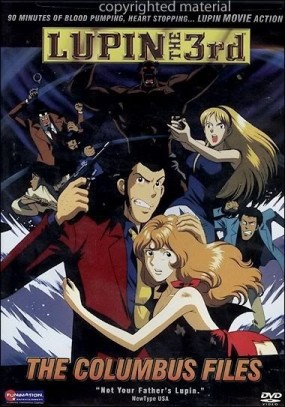 Lupin III: The Columbus Files, released in Japan in 1999 as Ai no da capo ~Fujiko's Unlucky Days~ note 愛のダ·カーポ ~Fujiko's Unlucky Days~ , is the eleventh entry in the Made-for-TV Movie series of Lupin III Yearly Specials and the last Lupin III entry of the 20th century. The director of is none other than Shinichi Watanabe, who later went on to direct Excel Saga. Funimation released it with an English language dub in 2005 as the ninth of the ten Lupin films/TV movies they acquired for distribution, and it was also included in the 2006 "Final Haul" boxset.

Fujiko Mine is unveiling her latest scheme to Arsène Lupin III over a romantic dinner: she has found and memorized the "Columbus Files", a set of documents that reveal the location of a mysterious lost treasure, the Columbus Egg. Before she can tell him more, their evening is interrupted by the rascally Nazarov, sent to retrieve the information Fujiko has. As she and Lupin flee, however, they end up falling over a cliff. Lupin loses his grip, and Fujiko slips away...

Later, treasure hunter Rosaria returns to her home to find a frightened young woman hiding there; it turns out to be Fujiko, stricken with amnesia from her fall and traumatized by flashes of the attack. Even when Fujiko eventually reunites with Lupin and the gang, she can remember nothing. To make things worse, Nazarov and his boss wants the information from the Columbus Files locked away in Fujiko's missing memory. It's up to her friends and Rosaria, also tied into the mysterious documents somehow, to keep Fujiko out of the hands of the enemy, restore her to her normal self, and find out what the secret of the Columbus Egg really is.