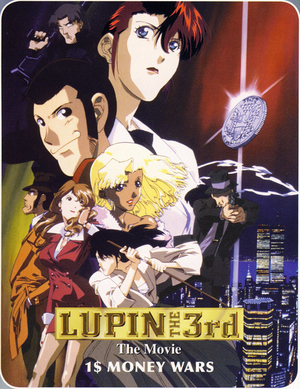 Lupin III: Missed by a Dollar (released in Japan as $1 Money Wars) is the 12th entry in the Lupin III Yearly Specials, first airing in Japan on July 28, 2000. It was directed by Hideki Tonokatsu, who would go on to direct next year's Alcatraz Connection. Incidentally, this is also the final Lupin special to be animated traditionally, with paint-on-cels; the series switched to digital production starting with Alcatraz.

This special is also the last one, chronologically, to be released in the West by Funimation.note  They published the specials out of order; the last one they dubbed was The Columbus Files, which they put out just after Dead Or Alive in 2006 and wouldn't dub a Lupin-related thing again until 2012's The Woman Called Fujiko Mine. It wouldn't be until 2018 that another special would be dubbed, and even then, Funimation has nothing to do with it.

Lupin has disguised himself and is bidding on a ring up for auction in New York City. The ring holds the secret location of a legendary broach; the broach is said to bring good fortune to whoever wears it and has been in the possession of Napoleon, Lenin, and Hitler. When a bidder outbids him by one dollar, he decides to take the more traditional route and steal it. However, a heavily armed group of men relieve him of his prize. They work for Cynthia, the head of Bank of the World.

Lupin gathers the troops to try to steal the ring back from the heavily protected headquarters. He succeeds in stealing it once again but appears to be fatally shot as they make their getaway. If Lupin is dead, who will stop Cynthia from obtaining the broach!?