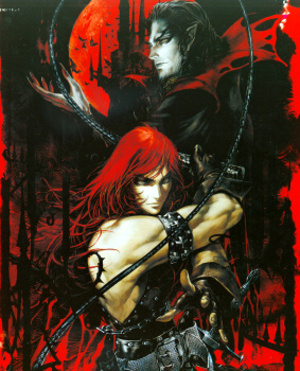 Artwork of Simon and Dracula, redesigned for Castlevania Chronicles' Arrange Mode.
Originally titled Akumajō Dracula (same as the original Castlevania) and released solely in Japan in 1993 for the Sharp X68000 computer, it was remade worldwide on the PlayStation in 2001 as Castlevania Chronicles. The PS1 version has two modes: "Arrange Mode" with updated graphics, music and sound effects and selectable difficulty, and "Original Mode" which is a near-direct port of the X68000 version.
Advertisement:

This game is the most recent depiction of Simon Belmont's assault on Dracula's Castle in 1691.