Our Homunculi Are Different 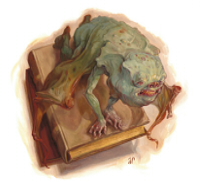 Enoch: They're homunculi. Sometimes I put doll heads on 'em, but this time I was in a hurry and didn't bother.
Jacob: What's a homunculi?
Enoch: More than one homunculus. Some people think its homunculuses, but I think that sounds daft, don't you?
Jacob: Definitely.
— Miss Peregrine's Home for Peculiar Children
Advertisement:

Homunculi are a type of Artificial Human connected to alchemy. Their traditional depiction is as tiny people grown in jars, but they tend to differ a lot in presentation. The singular is "homunculus".

Homunculus (masculine, Latin for "little human", plural: "homunculi"; from the diminutive of homo) is a term used, generally, in various fields of study to refer to any representation of a human being. Historically, it referred specifically to the concept of a miniature though fully-formed human body, for example, in the studies of alchemy and preformationism. Currently, in scientific fields, a homunculus may refer to any scale model of the human body that, in some way, illustrates physiological, psychological, or other abstract human characteristics or functions.

Often they are Born of Magic. A non-living vessel is magically imbued with life and consciousness. Depictions vary whether the homunculus requires magic to continue functioning after being made. Within the fantasy setting, a homunculus generally acts as a magician's assistant (a.k.a Familiar), spy, messenger, or even assassin. They are sometimes, but not always, capable of speech. If created correctly, they are loyal to a fault when it comes to their master.

The term can also refer to tiny people who live inside us controlling or operating our minds and bodies. Whether they have even littler people inside them is a matter of much head-scratching. "Homonculus" also refers to the neurological visualization of mapping out touch-sensory and motor control regions of the human brain.