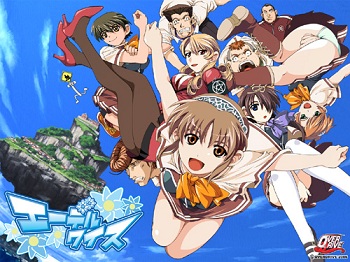 Edelweiss is a 2006 Visual Novel by the company Overdrive, also known for Kira-Kira. It was translated by Manga Gamer, their first translation project, and unfortunately, it shows. However, the quality improves in the fandisc.

The fandisc, Edelweiss Eiden Fantasia was released in 2008. It's a direct sequel to the original.

Edelweiss takes place on Eiden Island, an island containing the all-girls school of Eiden Academy that teaches alchemy. The protagonist, Kazushi, and his friends go to the island trying to score with some of the girls there: Haruka, the sweet granddaughter of the Principal; Mizuki, the tomboyish girl who loves swimming; Ran, a feisty money-loving girl with a touch of Nabiki; Natsume, the mysterious freshman that seems to be at odds with the Principal; and Mei, the beautiful teacher without a past. However, it doesn't quite turn out as he planned, since the whole island is full of wonders and secrets...

Eiden Fantasia stars Kazushi again, and features Rin and Sakura (no, not that Rin and Sakura), the two most popular heroines of the original that didn't have their own routes.

Not to be confused with the tank, the other Edelweiss

, nor the song or the creator Edelweiss.