Our Hydras Are Different 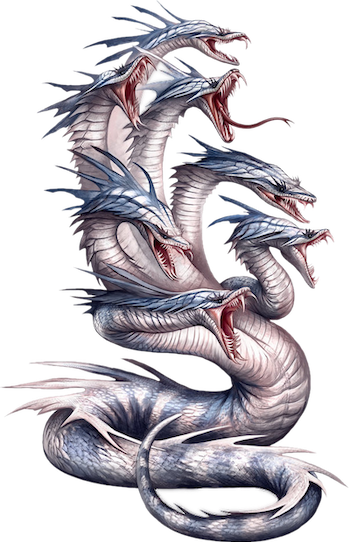 Fictional hydras trace their roots to the Lernaean Hydra, which inhabited the Swamps of Lerna in Greek myth until slain by Heracles. Like many monsters with mythical origins, hydras are often A Kind of One — the original Hydra of Greek myth was a Single Specimen Species, but the name is now typically used for entire species of multi-headed reptiles fashioned after the Greek Hydra.

One of the most iconic characteristics of hydras is their ability to regrow severed heads; sometimes they will simply regrow a new head whenever an old one is cut off, but they can often grow multiple heads (traditionally two) for every one lost. As a result, most obvious ways of dealing with these beasts tend to be useless at best and actively counterproductive at worst, requiring would-be hydra slayers to get creative with their methods. Even when hydras can't grow back heads, they'll often have some form of Healing Factor.

Like the original Greek beast, hydras are very often swamp-dwellers; so they can easily be the resident Swamp Monster in a Swamps Are Evil setting.

As the original hydra was typically described as a many-headed water snake, modern hydras often display ophidian traits to greater or lesser degrees. They may be depicted as limbless, snake-like slitherers, but it's also very common in modern media for them to be four-legged creatures instead, generally resembling some sort of lizard or dinosaur with a writhing tangle of heads sprouting from their torsos.

While not overwhelmingly common, it's not unheard of for a link to be made between hydras and dragons. Some works will treat the two creatures as distinct but similar or related species, while others have hydras as a specific sub-type of dragons. If a Breath Weapon is present, it's common to have each head possess a different breath weapon, similar to Tiamat from the Dungeons & Dragons franchise. Works which define hydras as a form of dragon are the likeliest to give them traits such as legs, stubby wings, horns or the like, in order to increase their physical resemblance to what dragons are usually shown as looking like.

See also Hydra Problem, describing any case where harming an enemy in a straightforward way only makes it stronger, Reptiles Are Abhorrent and Multiple Head Case. Compare Orochi.

Hercules faces the iconic multi-headed serpent early in his hero career. Its face is rather disturbingly humanoid and it drags its bulky body with its only two birdlike talons. The creature starts out with only one head, but ''three'' new ones grow in the place of each cranium lost.

Hercules faces the iconic multi-headed serpent early in his hero career. Its face is rather disturbingly humanoid and it drags its bulky body with its only two birdlike talons. The creature starts out with only one head, but ''three'' new ones grow in the place of each cranium lost.