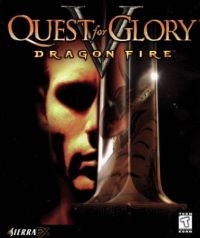 Our Hero reflects upon his enemies.
Advertisement:

Quest for Glory V: Dragon Fire is the fifth and last game in the Quest for Glory series, a 3D revival of the franchise brought about by fan request. After the events of the last game, the Hero finds himself teleported to Silmaria to discover the truth behind the murder of Silmaria's King. Many characters from previous installments are Back for the Finale, a mysterious assassin roams unchecked, a Prophecy of Doom lurches toward its inevitable fulfilment, all while the Hero competes with other characters in the rites to determine the next King of a land modeled after ancient Greek myths and legends.