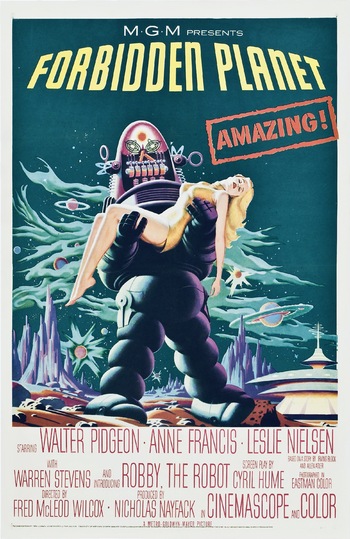 How to best sum up its plot? Think Shakespeare...IN SPACE!

Loosely adapted from The Tempest (with a few nods to H. P. Lovecraft's At the Mountains of Madness), Forbidden Planet tells the tale of an Earth rescue mission to the planet Altair IV in order to determine the fate of the starship Bellerophon, which landed an earlier expedition. United Planets Cruiser C-57D, piloted by Commander John J. Adams (Nielsen), arrives to find that the Bellerophon's sole survivors are Dr. Edward Morbius (Pidgeon), his daughter Altaira (Francis), and their robot house servant, Robby. Adams's investigation into the mystery reveals secrets that can change the course of human civilization but unleashes a hideous monster in the process.

A classic of '50s sci-fi cinema whose story, production values, and special effects hold up well even by today's standards. It is the first film whose soundtrack consists entirely of electronic music and which was written for magnetic tape (and it was made by a couple, Louis and Bebe Barron).

By the way, if you watch this film and can't help but think it feels completely like a Star Trek episode without Mr. Spock, it's no accident — Gene Roddenberry fully admitted that Forbidden Planet was one inspiration for his series. It also gave some Japanese creators their momentum, and its elements can be found again in Space Battleship Yamato and Space Runaway Ideon.

It spawned a Jukebox Musical version called Return to the Forbidden Planet which hit its popularity in the '90s, winning an award and gaining a slight cult following.