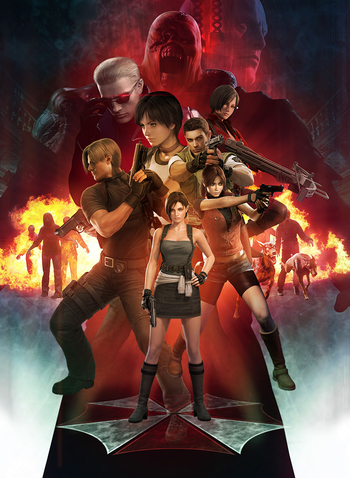 Welcome to the world of Survival Horror. note Clockwise, starting at the bottom: Jill Valentine, Leon Kennedy, Rebecca Chambers, Albert Wesker, Nemesis-T Type, Oswald E. Spencer, Ada Wong, Chris Redfield, Claire Redfield.
"Like any corporation involved in dangerous research, it all boils down to risk versus reward for the Umbrella Corporation. In this case, the risk is zombies, and the reward is zombies."
— Cracked, "6 Evil Corporations in Movies (With Terrible Business Plans)"

Resident Evil (known in Japan as Biohazard) is a Survival Horror and science fiction video game series. It has since branched off to become a media franchise consisting of comic books, novelizations, a live-action film series, and a variety of collectibles (including action figures, strategy guides, and publications). Developed by Capcom and produced by Shinji Mikami up until 2005, the series has sold 103 million copies as of 2020.

The premise of the original Resident Evil was that the Umbrella Corporation was conducting sinister experiments in a mansion outside of the "Midwestern" town of Raccoon City, and a team of SWAT-like police called the Special Tactics and Rescue Service, or S.T.A.R.S., stumbles onto it in an investigation of several cannibalistic murders. Further games expanded on this premise, and it has since become one of the most critically and commercially successful action-horror games series of all time in addition to coining the term survival horror. This also includes three CGI films, Degeneration, Damnation and Vendetta, set in the same universe as the games. The latest installment, Resident Evil Village, was released in May 7, 2021 on the PlayStation 5, Xbox Series X, and PC.

The live-action movie franchise starring Milla Jovovich was also moderately successful; it spawned six movies, with the last one, The Final Chapter, released in 2017. A Continuity Reboot, Resident Evil: Welcome to Raccoon City, came out in 2021.

The following is a list of game titles in the series, ordered by their year of release and platforms they were released on.

The main series is comprised of:

The rebooted film series consists of:

There is also a straight-to-video CGI movie series, which are set in the continuity of the games:

Some prequel manga have also been made, some of which is canon according to Capcom.

Two stage plays and a musical were launched in Japan, which are canon according to Capcom.

Some Fan Games were notable enough to get their own pages, such as...

Other media tie-ins include a number of manhuanote All of them set within alternative universes eventually, radio dramas and mobile phone games.

The Character Sheet is here.