"These experiments have been designed to weed out those who will be of no use to us... Well, lab rat. Which one are you?"
— The debriefing given to players in Umbrella Corps' Basic Training Mode. 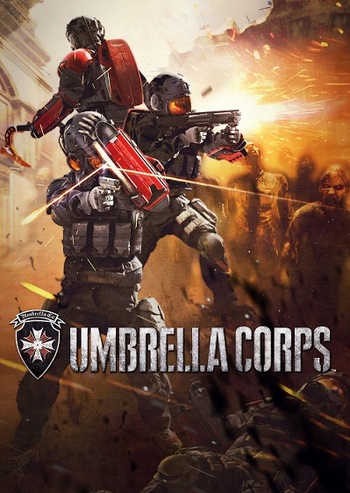 Seize Victory from the brink of defeat!!

Umbrella Corpsnote Known in Asia as Biohazard: Umbrella Corps is a multiplayer-based tactical shooter game developed and published by Capcom for Microsoft Windows via Steam and for the Playstation 4 worldwide on June 21, 2016, although Japan got the game on June 23, 2016, as part of the franchise's 20th Anniversary. The game is currently available to buy via PSN and Steam except for Asia, which has a physical release available. It was officially unveiled by Capcom during the 2015 Tokyo Game Show event behind closed doors.

The game takes places in 2016, three years after the events of Resident Evil 6. Due to the prevalence of B.O.W.S. used in various terrorist attacks in the aftermath of Umbrella's collapse and the proliferation of bioweapons in the hands of criminals, terrorists, arms smugglers and rogue nations, several corporations began to recruit and deploy mercenaries to go to parts of the globe and secure research data, viral data and confidential information in order to create their own B.O.W.S. for themselves.

The game has a story mode, known as Experiment in where a mercenary named 3A-7 is sent on missions by Abraham Jackson in order to secure information in the field in various places taking place from 2012 to 2013. Multiplayer mode consists of Respawn Match, Target Hunter, Domination, DNA Hunter, SP DNA Hunter, Protector, Collector and Collar War.

Umbrella Corps can be played in either first person or third person shooter mode, depending on the player's preference.