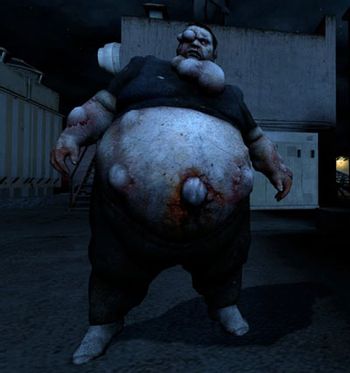 Boom, baby.
"The first rule of Zombieland: Cardio. When the zombie outbreak first hit, the first to go, for obvious reasons... were the fatties. Poor fat bastard."
— Columbus, Zombieland
Advertisement:

As if zombies weren't trouble enough, sometimes life (or undeath) throws fat zombies into the mix.

Since zombies are reanimated corpses, and since there'd likely be obese people amongst the casualties in a zombie outbreak (if not for their reduced ability to outrun the zombies, then for the simple reason that there's no reason they should be any less susceptible to undeath), this is sensible. It's often used, though, to combine the disgusting factor of extreme corpulence with the hideousness of zombification. Also, from a practical film making standpoint, "fat" zombies allow the stuntman to wear padded clothing and take a beating from the heroes.

For whatever reason, fat zombies tend often to be kamikaze attackers in video games, usually detonating in a shower of gibs and toxic fluids upon termination; as if, rather than having had an actual excess of adipose tissue in life, the zombie in question was just so overinflated with said toxic fluids that they looked fat. Somewhat Truth in Television, as a decaying corpse is bound to look at least a little bloated considering the gasses that are released during decomposition. Alternately, they may be prone to vomiting nasty substances onto the hero; this may be a further use of Villainous Glutton, ala the (false) belief that ancient Romans at a feast would deliberately make themselves puke to make room for more food, or it may be attributed to their rotting digestive tract.

Other times in video games, they tend to fill the role of bullet sponges or battering rams, somehow more durable than even "regular" zombies, due to their extra mass meaning they need more effort to shoot or chop up.

In non-video game media, though, they tend to not be too much different from other zombies.

See also Fat Bastard, Kevlard. For another way zombies can stand out in a crowd, see Incongruously-Dressed Zombie.

Not to be confused with The Load, who's only dead weight from a figurative/narrative standpoint. See Weight Loss Horror for other ways in which weight can be played for horror.