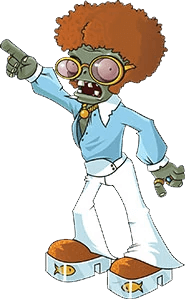 Most zombie encounters in fiction get their shock value from gore, ambush, or the pathos of seeing a named character arise from death to attack the surviving cast. But not every horror scene takes itself that seriously; sometimes, when pacing or tone demands a tension-breaker, filmmakers will toss in the visual gag of a zombie that's dressed in an ironic or amusing outfit: a Halloween costume, an unusual profession, nothing at all, wedding attire, etc.
Advertisement:

While undead in goofy outfits seldom stay on screen for long, they provide a bit of a breather for the audience, while giving the production's costumers and make-up crew a chance to exercise some creativity. Their presence can also remind viewers that zombies, however mindless or indistinguishable in undeath, used to be unique, living individuals: that they're creatures to be pitied as well as dreaded. Not to mention that the horror of being attacked and zombified (or whatever) can happen right in the middle of you living your life.

Not necessarily exclusive to zombies: vampires, ghosts, biped werewolves, and other human-derived monsters may also be examples of this trope, provided their outfit is unexpected and/or goofy enough to surprise and amuse the audience. Distinguished from Our Zombies Are Different in that the Incongruously Dressed Zombie only looks unique; functionally, it's usually (though not necessarily) your standard-issue Night of the Living Mooks drone. Compare and contrast Attractive Zombie who retains both his/her personality and good looks.

If an undead creature's clothes look odd because they date from a past era, that's Outdated Outfit. If the outfit was goofy back then, these tropes overlap. Compare to Jacob Marley Apparel. Related to Wight in a Wedding Dress.