Film / Diary of the Dead 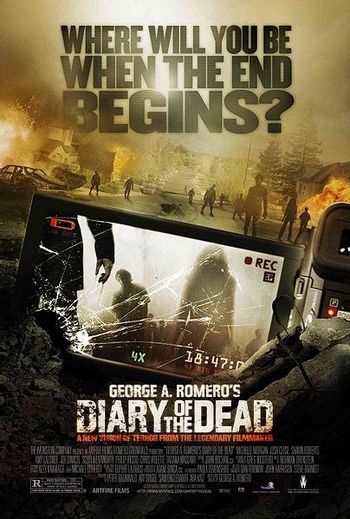 Debra: "We made a film - the one I'm going to show you now. Actually, Jason was the one who wanted to make it. Like that cameraman from Channel 10, he wanted to upload it so that people, you, could be told the truth. The film was shot with a Panasonic HDX-900 and an HBX-200. I did the final cut on Jason's laptop. I've added music occasionally for effect, hoping to scare you. You see, in addition to trying to tell you the truth, I am hoping to scare you so that maybe you'll wake up. Maybe you won't make any of the same mistakes that we made. Anyway, here it is, Jason Creed's The Death of Death."
Advertisement:

Diary of the Dead (2007), the fifth movie in the Living Dead Series written and directed by George A. Romero, marked his return to making independent films after Land of the Dead. The movie is followed by Survival of the Dead.

The movie opens on a news report, being narrated by the Final Girl, explaining the reasoning behind the movie itself. The main story line starts of with a group of film students, along with their sardonic boozing professor Andrew Maxwell (Scott Wentworth), making a classic cliched horror movie. When the group hears escalating radio reports of people coming back from the dead, the shoot falls apart, with monster-player Ridley (Philip Riccio) departing in his sport cars as the rest of the group leaves in a Winnebago. Going on a harrowing road trip and encountering the Zombie Apocalypse equivalent of Wacky Wayside Tribes.