Film / Survival of the Dead 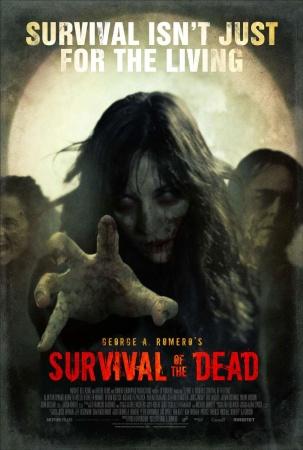 Survival of the Dead (2009) is the sixth and final horror film in George A. Romero's Living Dead Series (as well as his last film in general). It follows some characters who briefly appeared in the previous film, Diary of the Dead.

The movie takes place in a desperate, nightmarish world where the dead walk the earth, relentlessly attacking the living. It is the story of Plum Island - a beautiful refuge whose isolation allows two powerful families to maintain a semblance of order in the wake of the zombie holocaust. But as the inhabitants slowly die off, the two clans become sharply divided: The O'Flynns believe that the undead must be destroyed without exception, while the Muldoons insist that afflicted loved ones be kept "alive" until a cure is found. Into this situation wander a small group of National Guard troops who have decided to strike out on their own in an effort to survive.