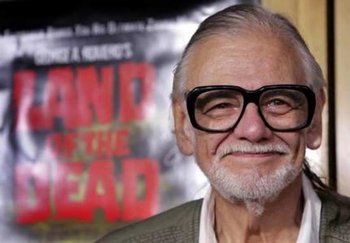 George Andrew Romero (February 4, 1940 – July 16, 2017) was a director of B-Movies and horror movies, namely the Living Dead Series, in which he had occasion to invent a famous trope.

Romero was born in New York City to a Cuban immigrant father and a Lithuanian-American mother. After attending college at Carnegie Mellon he began work in television and commercials. He banded together with some friends and investors and founded a film production company. When it came time write a script, Romero and co-writer John Russo drew inspiration from the novel I Am Legend, in which The Virus turns almost all of humanity into vampires. Romero and Russo tweaked this idea to make the monsters into flesh-eating, re-animated corpses.

The resultant film was Night of the Living Dead, which became one of the most successful B-movies of all time. It also re-defined the word "zombie". The word originally comes from voodoo, or rather Hollywood Voodoo, and meant voodoo zombies, namely the comatose or dead that have been animated and enslaved to a master by voodoo magic. Romero's concept of the zombie became so iconic that it pretty much Covered Up the voodoo zombie in pop culture.

Romero kept working after this, making films like Season of the Witch and Martin, but those films didn't catch on with the public like Night of the Living Dead did, so he went back to the zombie well with Dawn of the Dead in 1978, Day of the Dead in 1985, and Land of the Dead in 2005. His other credits included the horror movies Creepshow and Monkey Shines, and he was an executive producer of the 1980s syndicated horror television series, Tales from the Darkside.

Romero passed away in his sleep on July 16, 2017, after a battle with lung cancer.