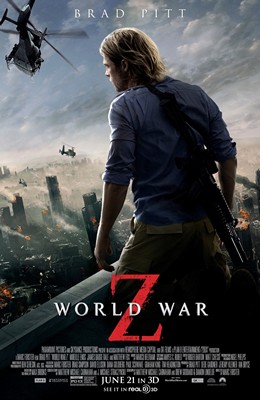 "Mother Nature is a serial killer. No one's better. Or more creative. Like all serial killers, she can't help the urge to want to get caught. What good are all those brilliant crimes if no one takes the credit? So she leaves crumbs. Now the hard part, why you spend a decade in school, is seeing the crumbs. But the clue's there. Sometimes the thing you thought was the most brutal aspect of the virus, turns out to be the chink in its armor. And she loves disguising her weaknesses as strengths. She's a bitch."
Advertisement:

World War Z is a 2013 Disaster Movie based on ideas from the book of the same name. It stars Brad Pitt (who also produced the film), Daniella Kertesz, Peter Capaldi, James Badge Dale, Michiel Huisman and Mireille Enos. Instead of being a direct adaptation of the book that describes the survivors' recollections of the titular war, the film tells a sidestory about events that take place before and during the Zombie Apocalypse. It was directed by Marc Forster, co-written by Damon Lindelof and scored by Marco Beltrami with Muse.

Gerry Lane, a former employee of the United Nations, is happily settled in Pennsylvania with his family, having given up a globe-trotting journalism gig to be with them. When they leave home, they begin to hear news of an outbreak of African Rabies on the radio, and quickly find that the rumors of the disease are true when a horde comes rushing through the city. After they make a harrowing, nerve-wracking escape from the city, Gerry is forced back into service, tasked with finding the source of the disease in hopes of developing a vaccine.

The film brought new meaning to Development Hell and Troubled Production, as it went through several enormous revisions including a new last act featuring Peter Capaldi, suffered multiple people leaving, and eventually devolved to the point where Brad Pitt and the director couldn't talk to each other anymore. It's safe to say that this was one of the most aggravating productions since Apocalypse Now. The entire plight can be viewed in great detail in the Trivia section.

A tie-in First-Person Shooter for mobile called World War Z developed by Phosphor Games Studio and released on May 30, 2013 about a survivor called Doug trying to rescue his son.

A sequel has been planned, with Brad Pitt returning, David Fincher was lines up to begin directing and running production beginning in early 2018, but he has since rescheduled due to commitments to Mind Hunter. As of 2021, Paramount chose not to continue plans for a sequel. According to Hollywood Reporters, it's due to directives from Beijing not to depict zombies or ghosts in films that played a big role in the sequel being cancelled.