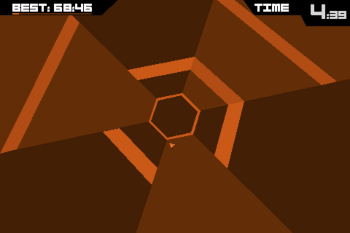 Stop spinning the view! I can't focus! Who designed this? Whoever it is is a bastard and I love them!
—Nerd³ Plays... Super Hexagon

, a browser-based Flash game made for Pirate Kart V

The rules are simple. You control a small triangle attached to the edge of the central hexagon. Your goal is to avoid being caught by the onrushing waves of walls coming in from the edge of the screen by dodging clockwise and counterclockwise around the perimeter of the hexagon for as long as possible. Watching the trailer

will give you a reasonably good idea of what this is like.

The game is currently available on iPhone and iPad via iTunes

, on Windows, Mac, and Linux

via Steam, on Android via Google Play

or the Amazon App Store

via the Humble Store, and on Blackberry 10 devices via Blackberry World.

The soundtrack, by Northern Irish chiptune musician Chipzel, is available for purchase on her Bandcamp page.

See also RFLEX for simplistic yet difficult and reflex-oriented gameplay.