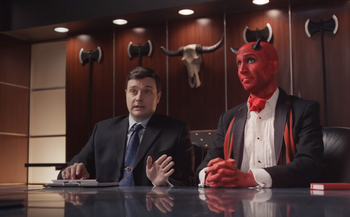 "Now, just because he's trying to lead you into sin and suffering and eternal damnation doesn't mean that you shouldn't listen to him for a moment."
Advertisement:

The Devil's Advocate is a person who attempts to provide justification for something that opposes their personal viewpoint in a particular instance. The Devil's Advocate may have been appointed to provide this viewpoint, or may be stalling for time, but in the truest sense of the trope is attempting to leave the argument having settled on the best possible result, even if that result is different from their preferred result. A person enacting this trope may be seen as either fair or argumentative, depending not only on how suddenly and fervently they change their position, but also on how often they take the opposing side, and more importantly, whether they bother announcing beforehand that they're attempting this.

Possibly named for the canon lawyers appointed by the Catholic church to provide an opposing argument for canonization, which may have itself been named for the idiomatic meaning of this phrase. As with other adversarial proceedings (such as civil and criminal trials), the idea is to thoroughly test an idea or proposition before acting upon it, on the assumption that any concept that withstands intense criticism has a better chance of being correct. The current modern term is "ombudsman", used by companies and governments to address complaints against the organization.

Compare and contrast Strawman Political, The War on Straw, and other strawman tropes, which are insincere and work to undermine the opposing side rather than strengthen the final resolution. Bothering by the Book has the same purpose but it may or may not provide a more accurate version of the opposing argument. For the negative connotations people sometimes have about adversarial proceedings, compare and contrast Amoral Attorney. For a version of this idea in comedies and morality tales, see I Don't Think That's Such a Good Idea. The Commander Contrarian can sometimes be this. See also The Complainer Is Always Wrong, as the trope is generally enacted specifically because the nonexistent complainer might be right. The Drag-Along may be this from a Doylist point of view, but is almost never a Devil's Advocate in-continuity. Also, this trope should not be confused with someone who just happens to hold a minority view. A person who does this just for fun is The Gadfly.