Video Game / The Wolf Among Us 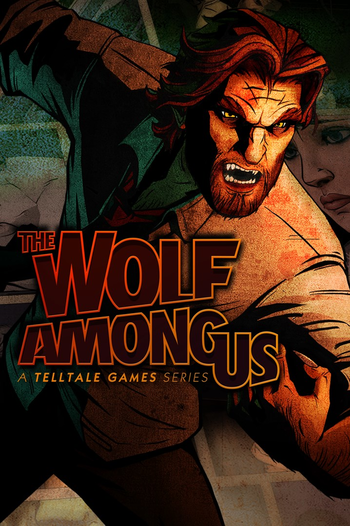 "Everybody knows you. Big Bad Wolf."
"Once upon a time in New York City, there lived a community of fairy tale characters known as Fabletown.
The Fables who live there arrived hundreds of years ago, after they were exiled from their Homelands.
Through the use of a magic spell called Glamour, they have protected their secret community from the mundane world.
Sheriff Bigby Wolf protects them from each other."
— Episode One: Faith
Advertisement:

The Wolf Among Us is an episodic adventure game developed by Telltale Games, the developers behind The Walking Dead (Telltale). It takes place in the world of Bill Willingham's Fables comic book series, and is canonically a prequel to the events of said comics. In a nutshell, it's a Film Noir set around characters of archaic tales, and their difficulty surviving in a modern, crapsack world.

The player takes control of Bigby Wolf, the Big Bad Wolf famed in fairy tales, as he faces a conflict between his suppressed lupine nature and his desire to turn over a new leaf, keeping the citizens of Fabletown safe. All is not well in Fabletown, and a mysterious murder kicks off a situation which rapidly begins to deteriorate, threatening the entire community, leaving Bigby to cut through the tangled web of deceit and sniff out the truth — before it's too late.

The game features combat similar to The Walking Dead (Telltale), Telltale's previous choice-based adventure game, in that the player must use their cursor to quickly react to events and beat down their opponents. However, there are differences between Lee and Bigby; Bigby, being The Big Bad Wolf, is larger and much more physically powerful than Lee, and he won't be fighting off any zombies, so unarmed combat and improvised weaponry are far more par for the course than are the guns featured in The Walking Dead.

Gameplay, however, is focused primarily on solving the mystery surrounding the aforementioned murder, and sharp-eyed players will find themselves at a significant advantage here. The more evidence Bigby collects at a scene, the more pieces of the puzzle he will have.

The first season has been fully released. It consists of five episodes:

A second season was announced in 2018, but it was later cancelled due to the abrupt closure of Telltale Games. The game was Un-Cancelled in 2019 after Telltale Games was reformed by LCG Entertainment. It is scheduled to release in 2023. The trailer can be seen here.

The Wolf Among Us has also been adapted into a 16-issue digital-first comic series. The comic closely follows the plot of the game, but adds a lot of backstory, with a good third of the comic devoted to extended flashback sequences in which we not only see Bigby's early years in the mundane world and his history with some of the other characters, but also the backstories of the game's antagonists.

Please note that, as the first season has concluded and the page is whited out otherwise, spoilers for the first three episodes will be unmarked.

The Wolf Among Us contains examples of the following tropes:

The Jersey Devil is an antagonist in the fourth episode of The Wolf Among Us, running a pawn shop as a front for criminal activity. He's glamoured to look like a human, but his true form is a grey-skinned demon with a horse's skull for a head.

Example of:
The Jersey Devil

The Jersey Devil is an antagonist in the fourth episode of The Wolf Among Us, running a pawn shop as a front for criminal activity. He's glamoured to look like a human, but his true form is a grey-skinned demon with a horse's skull for a head.