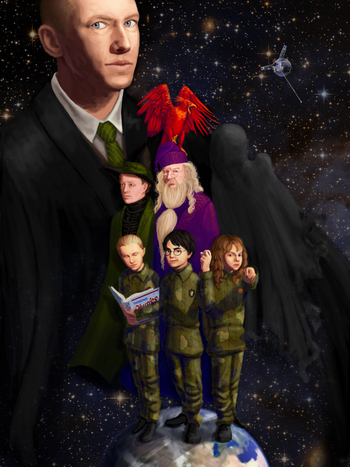 by Zerenity
Harry: You can't DO that!
Minerva McGonagall: It's only a transfiguration; an animagus transformation, to be exact—
Harry: You turned into a cat! A SMALL cat! You violated Conservation of Energy! That's not just an arbitrary rule, it's implied by the form of the quantum Hamiltonian! Rejecting it destroys unitarity and then you get FTL signaling! And cats are COMPLICATED! A human mind can't just visualize a whole cat's anatomy and, and all the cat biochemistry, and what about the neurology? How can you go on thinking using a cat-sized brain?
Minerva: Magic.
Harry: Magic isn't enough to do that! You'd have to be a god!
Minerva: ... that's the first time I've been called that.
—Harry's first encounter with magic
Advertisement:

The Book of HPMOR Fanfics

open/close all folders
A - B
C - E
F - G
Advertisement:
H - J
K - M
N - O
nor lord the champion
no mother and no father
only nothingness above.
P-T