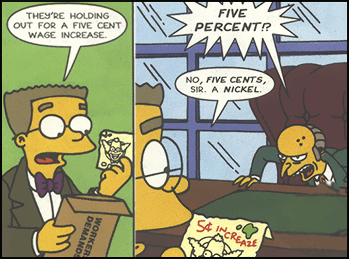 Dr. Evil: Here's the plan: we get the (nuclear) warhead, and we hold the world ransom for... one million dollars!
Number Two: Ahem — don't you think we should, maybe, ask for more than a million dollars?
— Austin Powers: International Man of Mystery

Someone with authority or power (or the delusion of such) uses it to command, force, or negotiate with people to do mundane or simple tasks for him/her.

Usually the person ordered may eagerly oblige, having expected a more serious and/or dangerous task or being threatened if refused, though possibly with initial disbelief.

Alternatively, it could be a mundane reward or offer from performing a service, especially if the people needing it are poor or even extravagantly rich.

The reasons for the mundane needs are:

If there is a series of demands, you can expect the last one to be this.

When the boss sends people to do important things, then sends one to do something mundane, that's You, Get Me Coffee.

Compare Mundane Wish, Mundane Utility, Comically Small Bribe, Disappointed by the Motive, and Sold His Soul for a Donut. If it involves food, it overlaps with Bratty Food Demand.