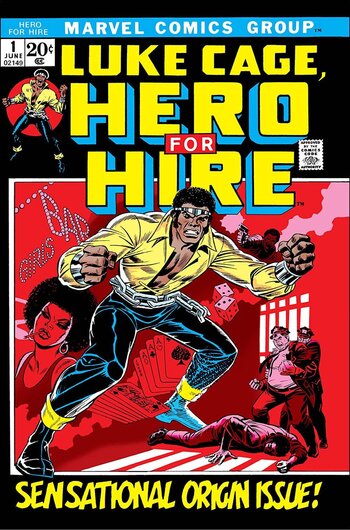 Sweet Christmas!
"You're right, Stryker. I lost my way. I lost my humanity. I forgot who I was...but then something happened — Something I didn't expect — I was reborn!"
Luke Cage
Advertisement:

Luke Cage, Hero for Hire, (aka Power Man) is a Marvel Comics series debuting June, 1972. Originally created as part of the 1970s blaxploitation craze. the series was created by writers Archie Goodwin and Roy Thomas, along with artists John Romita, Sr. and George Tuska.

Carl Lucas grew up on the streets of Harlem. Convicted of a crime he didn't commit, he was offered a chance at parole if he'd participate in a prison experiment on cell regeneration. The experiment was sabotaged by a prison guard with a grudge against Lucas, granting him super strength and Nigh-Invulnerability. Traumatised by the experiment, Lucas lashed out at the guard, then, fearing that his lash-out would see him losing parole, made a break for it. Returning to New York, he was inspired to become a 'hero for hire', helping out anyone who could pay his price, and adopted the pseudonym "Luke Cage".

See here for more info on Luke Cage in general.