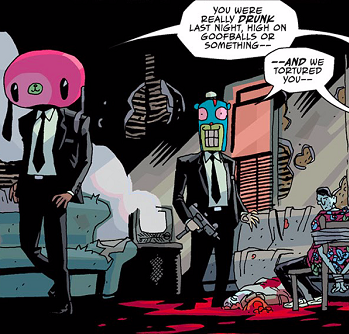 "'But, Mister Croup, we hurt people. We don't get hurt."
Mr. Croup turned out the lights. "Oh, Mister Vandemar," he said, enjoying the sound of the words, as he enjoyed the sound of all words, "if you cut us, do we not bleed?"
Mr. Vandemar pondered this for a moment, in the dark. Then he said, with perfect accuracy, "No."
— Neverwhere
Advertisement:

The Bantering Baddie Buddies are an inseparable pair of hitmen, criminals, or other Hired Guns who dish out violence and witty banter with equal measure. They engage in Seinfeldian Conversations, Snark-to-Snark Combat, philosophical dialogue, and Bond One Liners as they go about their violent business, and are typically eloquent (or so they think), Wicked Cultured, suit-wearing badasses.

The Bantering Baddie Buddies are rarely the top antagonist, but they are dangerous, and often fill the role of The Heavy. Their wit often endears them to audiences, and sometimes they can be Affably Evil Punch Clock Villains, but more often than not these characters are Faux Affably Evil and use their eloquence to mask their dark core.

The Bantering Baddie Buddies may refer to each other as Mr. X and Mr. Y, as a Shout-Out to Mr. Wint and Mr. Kidd of Diamonds Are Forever, one of the Trope Codifiers.

Compare/contrast Bumbling Henchman Duo. In both cases, a villainous duo provides entertainment, but the Bumbling Henchmen Duo is amusing because of their incompetence, whereas here the duo is entertaining and scarily competent. May overlap with Those Two Guys if the pair provides recurring, Greek Chorus-style commentary on the story's events, and Evil Duo if one of them is more cerebral than the other. See also Big Bad Duumvirate, Co-Dragons, and Villainous Friendship. Compare Boss Banter for when video game bosses provide witty banter in their battles, which may overlap with this trope if the bosses are Dual Bosses.