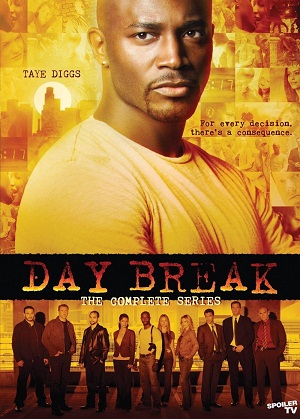 "We may race and we may run"
"We'll not undo what has been done"
"Or change the moment when it's gone"
— David Gray's The Other Side, played near the end of the first episode
Advertisement:

Today Detective Brett Hopper will be accused of shooting state attorney Alberto Garza. He will offer his rock solid alibi. He will realize he's been framed. And he will run. Then he will wake up and start the day over again.

Day Break was a 2006 action thriller television series starring Taye Diggs as a cop framed for murder. He's on the run from the police, a local Latin gang who want to track down the key witness he's hidden away, and the shady mobsters who want him to take the fall. With each loop Hopper gets another chance to fix all his mistakes and try to escape the day.

What sets this apart from other time loops is the fact that injuries sustained carry over in the loop, so dying is not an option. Also, he can inspire individuals to fix their own problems by leading them towards their own personal epiphanies, which keeps him from having to fix everyone's problems everyday. This can cause problems when people don't do what he expects.

It's up to Hopper to find the true murderer, save his loved ones, get his witness to trial in one piece, and make it to tomorrow.

Not to be confused with the British breakfast television show or the Netflix series.

"Remember, for every decision, there's a consequence."