Saved by the Platform Below 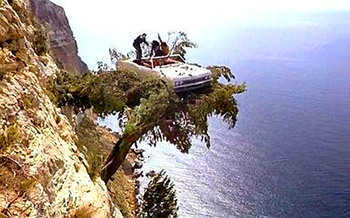 A character falls or is pushed off the edge of a building or cliff to their death. No One Should Survive That, right?

Wrong. The next shot reveals that their fall has been interrupted. If Played for Laughs, it's usually a window washing platform or a deck on a lower level that saved their life. If Played for Drama, the character will probably be holding on to a ledge or protruding pole. If they've gone off a cliff, it's usually a small tree that's likely to start breaking under their weight to add further suspense, in which case this situation has turned into a Literal Cliffhanger.

An easy way to set up a Disney Death for the good guys or a Not Quite Dead surprise from the bad guys.

The invoked version of this trope is Suicidal "Gotcha!", where a character willingly jumps off, knowing s/he will be saved by whatever object is waiting below. Sister trope of Catch a Falling Star where a falling character is caught mid-air by some entity.