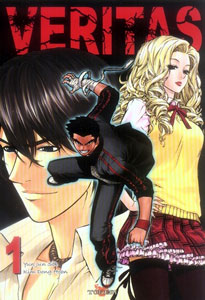 Veritas is a martial arts sonyun Manhwa written by Yoon Joon-sik and illustrated by Kim Dong-hoon. It is published in Booking magazine. The official website can be found here

. The manhwa is about a hard headed high school student who seeks to become the strongest and find out who killed his master.
Advertisement:

Gangryong is a high schooler unlike others. He has always had a dream of being the strongest. One day he meets Youcheon aka ''Lightning Tiger'', who saves him from a bunch of thugs. Gangryong begs Lightning Tiger to teach him. Lightning Tiger teaches him a powerful skill and then disappears. One year later, people come to see him and announce that his "master" is dead and show him the only body part they managed to recover was the charred, broken remains of his arm. Because he was his only student, Gangryong has to follow them and go to a school where everybody has supernatural powers. He accepts this as a way to farther his training and to find out why his master was killed. There, he endears himself to the student body with his reckless and cocky attitude.

Part 1 ended and Part 2 ever happening gets more unlikely as the years go by, KIM Dong-hoon has been drawing other hits, completely distancing himself from Veritas.