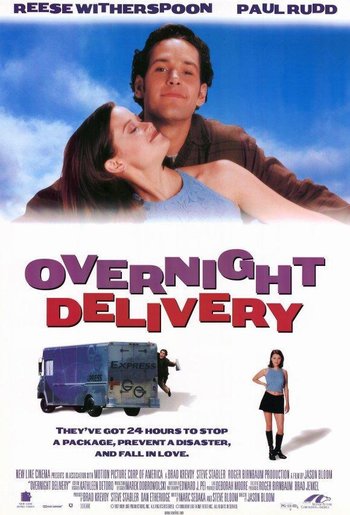 Overnight Delivery is a 1998 Direct to Video romantic comedy. The main arc of the film is a highly formulaic Road Trip Romance, made watchable mainly by a pair of highly likeable leads, both of whom are probably more recognizable now than when the movie was made.

Wyatt Tripps (Paul Rudd) is a smart and driven college student who spends most of his time pining over his girlfriend, who goes to a different school a thousand miles away. One night, he becomes convinced his girlfriend is cheating on him, gets drunk, and has a chance encounter with Ivy Miller (Reese Witherspoon), an impressively canny stripper who convinces him to write a particularly nasty breakup letter and send it by an overnight delivery service.

The next day, Tripps realizes his mistake, and enlists Ivy's help to get the package back before it gets to his girlfriend. A series of misadventures later and they find themselves on a road trip across the country, and wondering if he's racing toward the right girl.