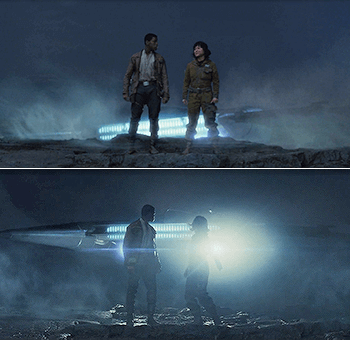 The gang is standing on a cliff's edge when they are startled by a helicopter which rises, roaring, into view... and yet that roaring helicopter somehow didn't make any noise until they saw it.

This is useful in a work to create some surprise wide-scale terror/action/heroics.

This is not restricted to helicopters: any roaring vehicle that should have made noise before appearing is a Surprise Vehicle.

It doesn't count if the audience hears the vehicle, but the character is too deep in thought or wearing headphones.

In Real Life, combat aircraft do something similar to this, though at much longer ranges, typically using the terrain for cover. However, this trope is mostly about something that is, in Real Life, very loud and very close, but the character doesn't hear it until it is seen.

Often a case of Gunship Rescue.

See also See No Evil, Hear No Evil; Silent Running Mode; Stealth Hi/Bye; Behind the Black; Rule of Perception; and Look Both Ways.