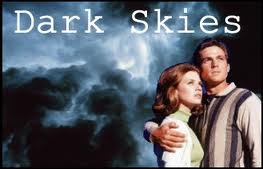 Does this remind you of anything?
Advertisement:

Political aide John Loengard (Eric Close) has a run-in with extraterrestrial forces, and ends up tracking a body-snatching alien invasion as part of the super-secret agency Majestic 12.

Dark Skies was launched at the height of the paranormal/conspiracy mania created (or at least fuelled) by The X-Files. Notable for its 1960s setting and a pre-Star Trek: Voyager role for Jeri Ryan as a Russian sexpot agent. Cancelled after one season.

Not to be confused with the 2013 horror film of the same name, though both are about aliens.