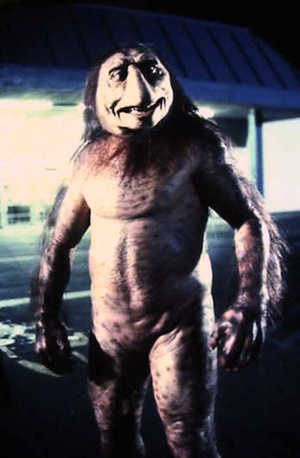 The smartest being in the universe can't waste time wearing pants.
"You have intergalactic starships, but you don't have goddamned pants? How does a civilization's evolution just skip over that part?"
— Cracked, "6 Giant Blind Spots in Every Movie Alien's Invasion Strategy"

Works that combine humans with non-human characters will often have the non-humans walking around stark naked (or as close as the Moral Guardians will allow) as they go about their everyday business. Genitals are never shown (or at least nothing that would be immediately recognizable as genitals to a human is); at best, these beings might wear a Seashell Bra or Fur Bikini to avoid Squicking their human companions.

While they will seldom mention any discomfort, savvy viewers might wonder how they regulate their body temperature or protect against environmental dangers, especially if they lack fur, feathers, scales, or something comparable. If the topic is raised, it'll usually be justified as either a religious or cultural norm, or Bizarre Alien Biology.

One might also wonder about the lack of pockets, though this might also be an issue for normally dressed humans in some settings.

Functionally, this helps to emphasize the otherworldly nature of the characters, as it contrasts the awkwardness of undressed humans against the easy comfort of the naked aliens/fairies/demons/whatever. It's also an easy excuse to provide some Fanservice or comedy, though almost always averted with Human Aliens. It can also simply be a form of cutting corners. After all, designing an otherworldly organism can be enough of a challenge without having to also design an otherworldly fashion sense.

Also see Barbie Doll Anatomy, Fur Is Clothing, Monster Modesty, Our Nudity Is Different, and Non-Humans Lack Attributes. Creatures with a Clothing Appendage may look clothed but actually be this. Compare National Geographic Nudity for a concept a little closer to home. Contrast with Little Green Man in a Can. The opposite trope of Enclosed Extraterrestrials. Not to be confused with a Broken Masquerade, which involves extraterrestrials (or otherworldly beings in general) being "exposed" to the skeptical masses.