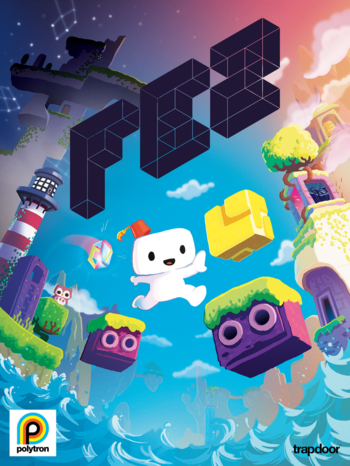 The game has players control Gomez, a small white... thing who lives happily in his peaceful, floating 2D village until he is summoned by the town's Old Adventurer. The Old Adventurer gives him a magical fez before revealing a shocking truth: The world is actually 3-Dimensional! The fez allows Gomez to perceive the 3D world and shift dimensions, but he can still only move across 2D planes. Using this newfound ability, he sets off to collect all the pieces of a giant magical cube that has been scattered all over the land, causing the fabric of reality to tear apart.

After initially releasing the game on Xbox Live Arcade, Fez went multiplatform on May 1, 2013, with the release of a Windows version of the game. Fish said

that Mac OS X and Linux versions would eventually follow, but the release date was still to be decided. The game later came out on PS3, PS4, and PlayStation Vita on March 25, 2014, and much later on the Nintendo Switch on April 14, 2021.

There was also to be a sequel to the game, simply titled Fez II. However, in late July of 2013, after being insulted by Marcus Beer a.k.a. the "Annoyed Gamer" on the GameTrailers video blog-podcast Invisible Walls, Phil Fish exploded into a very angry tirade on Twitter, and then outright quit the entire video game industry, the cancellation of Fez II coming in the announcement's wake.