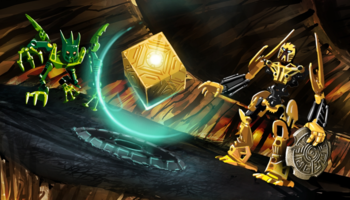 You can tell it's important because it's glowing and floating.
"The Cube is, at the same time, a symbol of simplicity and complexity."
— Erno Rubik
Advertisement:

Sometimes the Plot Device has a unique shape, carefully designed by the work's artists to look like no other.

Other times it's a box.

A cube's inherently unnatural shape, combined with its general lack of visual cues, instantly makes it an Eerily Out-of-Place Object. The mere sight of it invites several questions. Is it mystical in nature or a piece of Sufficiently Advanced Technology? So volatile that it'll explode if you poke it, or benign enough to move around if you're careful? Something that can be used for good or a tool for evil? Why is it glowing? Does anyone else hear that humming noise?

In addition to the atmosphere, making plot devices cube-shaped can also bring to mind imagery of "Pandora's Box". Some writers go the extra mile and even name their artifacts after it, even if the work in question doesn't have a lot in common with the classical myth.

Almost exclusively happens in Science Fiction, Fantasy, and Horror, as more contemporary genres have no reason for their Plot Devices to have a foreboding atmosphere since they're usually just mundane objects.

Sister Trope to Sinister Geometry, which evokes the same feeling of dread that this trope often does, but is significantly larger in scale, and can take any geometric shape, such as diamonds or pyramids.