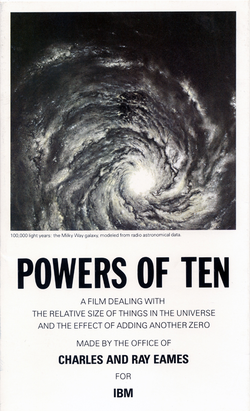 The film starts with a bird's eye view, exactly measuring one square metre, of a man and a woman at a picnic in a park near the south end of the Chicago lakes. The man lies down and sleeps and the woman reads. Accompanied by explanatory narration by Philip Morrison, the camera view slowly widens to a square of ten metres, then 100 metres, then 1 kilometre, widening by one power of 10 every ten seconds. The zoom continues in this fashion, encompassing the entire earth at the seventh power of 10 (10,000 kilometres), then the solar system, the Milky Way, until reaching the 24th power of 10 (100 million light-years), which was then considered to be the scale of the observable universe.

The narrator Philip Morrison adapted the film into a book, with each power-of-ten view represented by one image, surrounded by commentary about the objects and phenomena surrounding that particular order of magnitude. The film also inspired the 1996 IMAX documentary Cosmic Voyage narrated by Morgan Freeman, and the 2012 iOS app and short film Cosmic Eye.

In 1998, Powers of Ten was selected for preservation in the United States National Film Registry.

Powers of Ten contains examples of the following tropes: