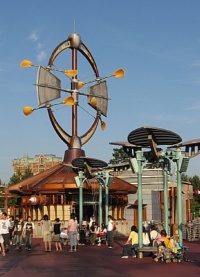 By all appearances, the coming energy crisis will be solved by strapping boat oars to steel rings and spinning them around in the air.
"[...] and if science has taught me anything, it's that if something is spinning, it's important."
— Gordon Frohman, Concerned: The Half-Life and Death of Gordon Frohman
Advertisement:

We all know spinning is spectacular, but sometimes "spectacular" means that science starts happening.

In Real Life rotation has many interesting and perplexing properties: precession, gyroscopic stabilization, and the generation of electric/magnetic fields just to name a few. Writers often use the intrinsic mystery of such phenomena to increase the plausibility of their devices functioning by making them rotate. This is especially true when the device involved needs to generate a field or zone of fictional type, being directly analogous to electric field generation.

In addition, rotation is a visually exciting way of informing the audience that the device is operating, and hopefully doing something sciency. Besides, rotation has the benefit of a closed path: if science just flew off in a straight line it'd be out of shot.

In Real Life, technology is usually not visibly exciting to watch in action. For example, your computer (while it has fans and drives which spin) does not actively move while in operation. In many cases, the fact that the machine or technology is operating at all can be somewhat oblique to the naked eye. Witness the many people who call into Tech Support claiming that their computer isn't working... because it isn't turned on. When it comes to various visual media, movement equals operation, which allows the audience to recognize that the machine is actually working or operational. Even if there is an obvious, prominent signifier of power (big green light, flashing red lights, etc.) positioned on the machine, in the eyes of many — it's not actually on until something starts moving.

A spinning laser starts up

A spinning laser starts up