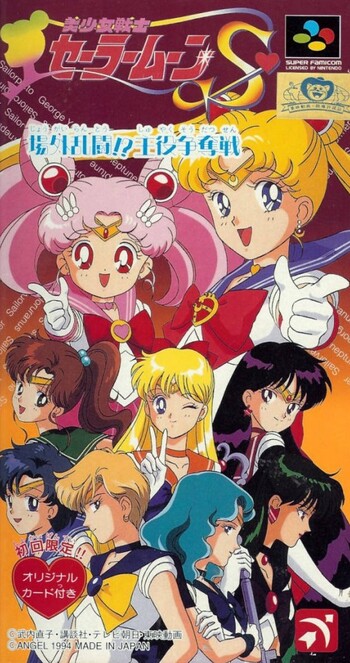 This is the resulting anarchy that forms when there's no-one to listen to what the "zoning is cheating" guy has to say. Sailor Moon S is the pre-John McCain MMA of fighting games: Adapt, or get your eyes gouged out. It's amazing how the Toronto Sailor Moon community can endure such unregulated waifu cockfighting. It's almost as if they're part of a community that celebrates salt as a driver of adaptation, instead of a means to strongarm game developers into patching out anything that seems remotely good.
— Core A Gaming, "Analysis: The Effects of Salt"

Bishoujo Senshi Sailor Moon S: Jougai Rantou!? Shuyaku Soudatsusen or simply Sailor Moon S, is a 1994 Fighting Game based on the Sailor Moon franchise for the Super Famicom. The game was published by Angel with the development work secretly done by a then unknown developer named Arc System Works.

Released only in Japan, the game was one of a number of fighting games based on licensed properties that was released during the genre's golden age in 90's. However, unlike most of these, it turned out that Sailor Moon S was actually a pretty good game. Partly because it was one of the first fighting games to come with an honest to goodness training mode, but mostly because it was just that good (this was Arc System Works after all).

During the 2000s, import copies of the game made their way to the west and into the hands of the Fighting Game Community. This resulted in the game getting played in gatherings and tournaments.

Finally, at the Evo 2018 tournament, Arc System Works eventually admitted to having developed the game after years of not saying anything.

Today, thanks to word of mouth and the efforts of the game's fans, Sailor Moon S now has a decent sized tournament scene and is a staple side tournament in many fighting game competitions, including Evo.

The video game gives some of the Sailor Senshi original attacks not seen in the manga or anime - for example, Sailor Mars' Fire Heel Drop and Sailor Jupiter's Double Axel. Some of these attacks would carry over to future BSSM fighting games. Naturally, the characters are all voiced by the original Japanese seiyuu as well.

A follow up game exists called Sailor Moon SuperS Shin Shuyaku Soudatsusen for the Super Famicom, and later Sega Saturn, which adds Sailor Saturn as a playable character. However, this version is generally seen as inferior to the original due to a number of gameplay changes.