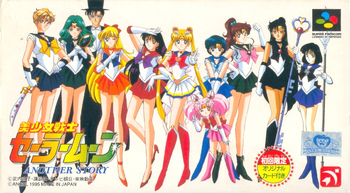 Sailor Moon: Another Story is a 1995 SNES Eastern RPG based mostly on the first Sailor Moon anime, (with some manga elements) taking place after the S season.

There, the girls' enemies are the Oppositio Senshi, a team of Evil Knockoff psycho rangers, who are led by the mysterious Apsu. She and the Oppositio Senshi are futzing around with time, resurrecting previous enemies of Sailor Moon, who must fight them off again.